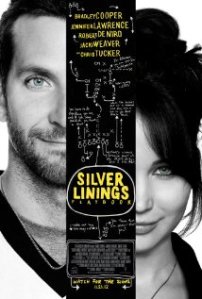 Starring Bradley Cooper, and the rapidly rising actress Jennifer Lawrence, Silver Linings Playbook is about a man (Cooper) that is released from a mental health facility after dealing with his bipolar disorder for eight months. After his released he goes home with his mother and lives with his parents. His wife has become distant, because she is afraid of his mood swings, but Cooper wants more than anything to reconnect with her and to start over. He is told that he can’t see his wife until he gets better, so he begins to improve himself with the goal of rekindling their relationship. During his rehabilitation, Cooper meets a young widow (Lawrence) who is almost, if not more strange than him. The two quickly become friends, and that is where the story really begins. Lawrence and Cooper must have taken chemistry in school, because they know how to create it really well. The two actors make a pairing that is so dysfunctional that it’s hard not to love them. Lawrence is a newbie when it comes to acting compared to her counterpart, Cooper, and supporting cast that includes Robert De Niro, Jacki Weaver, Chris Tucker, and Julia Stiles, but she holds her own and makes you think she’s been at this as long, if not longer, than her costars. The talents in this film were well recognized and appreciated with nominations for four Golden Globes, and eight Academy Awards, with Jennifer Lawrence winning one of each for best actress. It’s safe to say that if you like romance, comedy, and a little weirdness, you will enjoy this film.