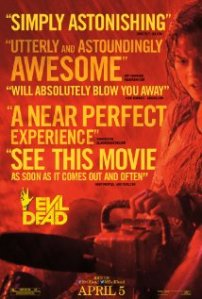 This reboot of the previous horror films of the same name stars Jane Levy (Suburgatory), and Shiloh Fernandez (Red Riding Hood). The film revolves around a drug addicted girl, Levy, who is taken to a cabin in the woods by her brother, Fernandez, and her friends to be rehabilitated by going cold turkey. While at the cabin, the group of friends come across a room in the basement that contains what looks like a religious alter with an old, creepy looking book. Of course, as with every horror movie, the stupid friend opens the book and reads it, even though it clearly says not to say the words out loud. The book releases an ancient curse and the friends must battle the supernatural and try to stay alive. The acting in this movie was decent, but what was really impressive is the fact that there was no CGI (Computer Generated Images) in the entire film. Every bloody scene, every screech inducing moment was created using props and lighting tricks. With movies starting to look like cartoons, this film is refreshing, because the creators were able to get the same horrific response from the audience as their fellow horror filmmaking brethren, without all of the technical doodads. If you like horror movies that make you jump, even if they’re a little predictable and cheesy, this is a must see, if not for the acting then for the amazing lack of technological embellishment.